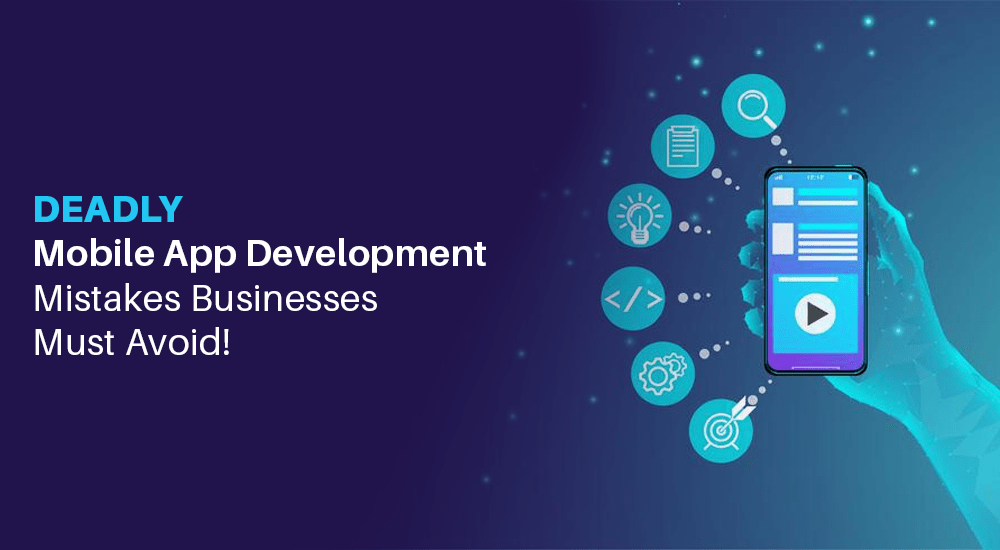 The most common mobile app development mistakes arise from poor market research, where you create mobile apps on urgent-need basis without considering several valuable steps ahead of time.

In addition, conducting surveys on customer needs and narrowing down the target audience are critical research elements to properly understand the requirements for incorporating certain features in your app, that can potentially enhance user engagement, ultimately making for a successful mobile app.

Underestimating the Overall Costs of Development

Underestimating the total budget of building a mobile app is another deadly mistake made by app developers. Lack of strategic planning from the beginning, for an accurate budget estimation of the overall app development, may end up hampering the app development process later on due to over-budget issues.

To avoid this deadly mobile app development mistake, you need to consider different resources like development hours, space, materials, and special marketing teams before the commencement of the actual app development process.

For successful budget estimation, app developers further need to be ready for the unexpected costs that could arise along the way.

Not Creating a Suitable MVP First

Making an MVP or Minimum Viable Product is crucial for developing a mobile app to gauge the app’s performance in real market conditions.

Disregarding the necessity of an MVP and diving right into the final build of a mobile app is another common mistake made by mobile app developers.

Without requiring an advanced level execution of the entire app development process, an MVP allows app developers to launch the nascent version of the app, loaded with all necessary features to glean effective customer feedback. Implementing this feedback can help refine the final product down the road.

This way, an MVP, as a preliminary product, can further reduce the actual app’s time and cost.

One of the biggest mobile app development mistakes is to not pay enough attention towards building the UI or User Interface, which is essentially the face of the app.

With a stellar UI, you ensure user retention, having met all of the user’s expectations, along with keeping the user engaged even while navigating through the application.

However, sometimes app developers can make the biggest mobile app development mistake unknowingly. Trying to be overtly creative with the UI may result in poor app performance like frequent crashes and high load times, ultimately jeopardizing the overall user experience.

Paying attention to the app resolution, and adding human-centric design elements like Gesture-based interface are the keys to designing top-tier UI/UX for mobile apps, ensuring customer engagement and paving the way towards successful app development.

Not Performing Regular and Effective Testing of the App

For a user, a glitch-free experience with an app is the first, second and third requirement; everything else comes later.

Retaining users by providing flawless performance must be the mantra for a successful mobile app development company. This can only be achieved through a series of rigorous testing processes. Continual testing must be executed throughout the different stages of the entire app development process.

The most common mobile app development mistake arises from not considering the various demands of effective testing process and procedures, leading app developers to not only fail in improving the user experience, but also in ensuring a bug-free app.

To avoid such a collapse in the overall app development process, mobile app development companies should start testing an app over a range of devices, rather than emphasizing on simple testing of the app.

Additionally, acquiring help from a third-party or professional app testing team, along with implementing the right tools and equipment to facilitate testing, will further ensure a glitch-free launch of the app.

Trying to Create Native Apps for Too Many Platforms

Among other common mobile app development mistakes, giving in to the temptation of building native apps for all possible mobile platforms is a big one.

Though native app development for the largest possible range of users seems lucrative from a revenue perspective, it can be particularly challenging from an app development standpoint.

Cross-platform mobile apps or hybrid apps solve this issue by combining native code and independent code that runs on more than one mobile platform, and thus would be a prudent way to avoid this cardinal mistake in mobile app development.

Overloading the App with Too Many Features and Functions

Running with an illusion of enthralling users with a bucket-load of enticing features and functions is one of the most critical mobile app development mistakes developers must look to avoid.

On the contrary, having a handful of targeted features can make any mobile application seem purposeful and easy to understand for its audience.

From the developers’ standpoint, sticking to the main feature and a few other supporting features not only fulfils the primary purpose of the mobile application, but also saves resources and efforts.

What Is the Key Take-Away?

For the successful launch of a mobile app, you need to take some preventive measures at the early stages of development, rather than rectifying the mistakes later, when a lion’s share of the efforts and resources have already been invested.

Implementing preventive measures like creating pre-launch awareness regarding Android and/or iOS application, testing the application before its arrival in the market, providing the application with enough user-friendly features, flexibility for upgradation, and space for user feedback should minimize the probability of these deadly mobile app development mistakes.

If you’re looking to launch your next BIG app, avoiding these simple yet catastrophic pitfalls will ensure to increase the likelihood of success for your app. If you want to streamline your app development process, partnering with a veteran mobile app development company can help your cause.

With decades of experience in developing stellar iOS, Android and cross-platform mobile apps, Josh Software can help you achieve a successful app launch with unparalleled time-to-market and maximum ROI.

Outperform your competition with superior mobile apps by Josh Software.Reach out now.